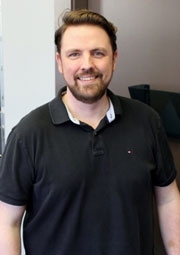 Kenny Hagerty previously worked as a Diabetes Medical Sales Representative and in 2013 became a graduate from the West Coast College of Massage Therapy’s 3000 hour program. Kenny’s passion is working with people and helping them with their rehabilitation. He enjoys deep tissue work and utilizing various techniques such as myofascial release and trigger point release. Using these treatment methods combined with passive/active movements, his goal as your massage therapist is to restore optimum function and movement throughout the body. Kenny also places a strong focus on continuing education especially in the fields of myofascial release, repetitive stress disorders, and anatomy.

He has recently achieved certifications in the following:

Kenny has volunteered as a therapist for numerous athletic events, such as the Whistler Gran Fondo, and the North Vancouver Knee Knacker Trail Race.

Outside of massage therapy, Kenny enjoys spending time with his two children and training for endurance sports. Kenny has participated in numerous events including the Oliver Half Ironman, Xterra triathlon, and 5 Peaks trail running series.